WGV, at White Gum Valley is an infill residential subdivision in the City of Fremantle, which involved the demolition of the former Kim Beazley School and redevelopment of the site and includes Australia’s first higher density Baugruppen Demonstration home, the SHAC site (Sustainable Housing for Artists & Creatives) and the award-winning Gen Y home.

Being an infill site, there were various challenges including existing steep grades across the WGV site where unconventional lot typology was developed to ensure earthworks and retaining wall efficiency. Variations in stepped and split lots allowed the landform to be maintained in conjunction with architectural input.

The design also responded to community requirements such as the retention of existing Men’s Shed and Sullivan Hall along with the City of Fremantle requests for the Yalgoo Avenue green corridor to be maintained. The civil works design therefore responded to the various constraints, including protection and maintenance of live services throughout construction.

Tree protection was an essential design element for the WGV project, with careful civil works designs and non-standard outcomes such as the shared zone laneway and off-centre road pavements in order to ensure the amenity was achieved with large tree retention throughout.  A community owned bore and irrigation scheme was also documented by TABEC for non-potable purposes, reducing water consumption for residents of the estate.

The existing deep, fenced, regional drainage sump was converted, through a negotiated outcome with City of Fremantle, to a shallow, landscaped useable POS area with inclusion of below ground drainage facilities for storage of the major storm event. In addition, stormwater generated from the site was also stored below existing and proposed road pavements which was documented and approved in the Urban Water Management Plan and resolved by TABEC. 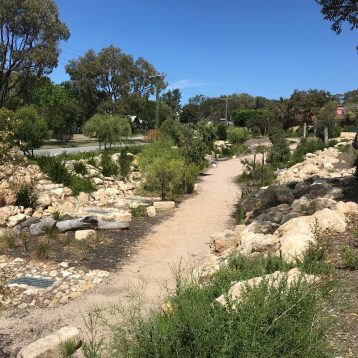 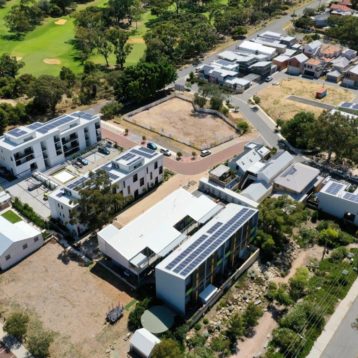