The Rivergums is 1,200-lot urban greenfield subdivision in Baldivis. TABEC was appointed to the project at its inception in 2001 and has completed design and contract administration for Stages 9B, 10A, 10B and 11A, comprising around 350 lots out of the overall development. The project is still under construction.

TABEC was able to demonstrate to Water Corporation the commercial return they would receive from a proposed wastewater pumping station and, as a result, they agreed to fund the pumping station under a Developer Constructed Headworks Agreement.

We also worked with the project’s Hydrologist to qualify the project for a Federal Government research grant which resulted in a benefit to the developer of over $1 million. To achieve this, TABEC designed an innovative drainage system that treated groundwater at its source, since there was little-to-no lateral movement in groundwater over the site.

TABEC fast-tracked the design and approvals of bulk earthworks to win fill material from offsite at a price well below the market value, which achieved a cost saving to the project in excess of $2.5 million. We also implemented a cost-effective earthworks practice which included opportunities to surcharge for non-structural fill and utilise the cut-to-fill program to complete blending which delivered significant overall project savings.

The accelerated construction program, which TABEC was instrumental in orchestrating, enabled the Department of Education to meet a political requirement to have a school completed ahead of the abutting residential development. We ensured there was timely provision of services, and safe access was made available throughout the subdivision construction site, with not a single incident taking place over the school’s 18-month construction period. 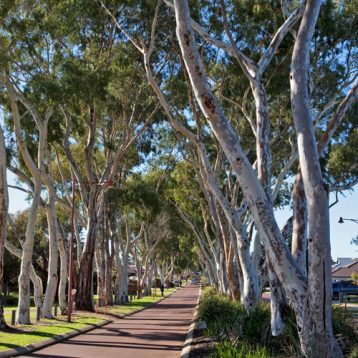